Once spring rolls around, the grass starts to get a little greener and baseball becomes relevant again. Baseball is America’s past time and multiple facets of this sport could be played anywhere. The game can also be modified for all ages and skill levels. 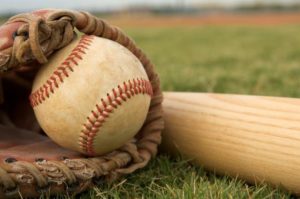 The conventional way includes a baseball diamond, four bases, a ball and a bat. But sometimes there might not be a baseball diamond or a bat. Don’t worry though, because there are still plenty of ways to modify the game of baseball and be physically active with minimal resources.

Baseball is a great sport for aerobic strength and conditioning and for kids to develop hand-eye coordination. Furthermore, baseball utilizes a number of muscles that are usually not utilized on an everyday basis such as shoulder muscles when throwing the ball around. During our Fit Club and Summer Camp, we have played conventional style baseball game and we have also altered it to get the kids moving a little bit more.

Traditionally, baseball has the perception of being a “slow” sport, which includes a lot of standing in the field. One way we have increased physical activity is changing the scenarios to start off each inning. For example, instead of starting an inning with no one on base, we will put a player on second and adjust the count of the batter. This is one way to increase participation with the children and to have them be more involved when the scenarios are not standardized.

Another great way to incorporate the fundamentals of baseball without all of the resources is a game called Pickle. This game simulates is a runner getting caught in-between two bases and trying their best to avoid a tag from the opposing player. This is a great game and can be played with limited space with as many runners as the game allows, and just some type of ball to toss in between the bases. This game involves quick movements and doing the best you can to avoid the tag.

Baseball is just one of the many sports that children could participate and have a lot of fun with too! With a little guidance, baseball can be a great form of exercise and healthy competition!