Usain Bolt is a world record-holding Olympic athlete from Jamaica. He holds the world record for the 100 meter, 200 meter, and 4×100 meter relay, and he is regarded as the fastest man in the world, for obvious reasons! 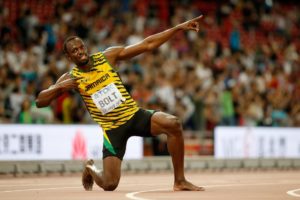 However, things were not always easy for Bolt.  Growing up in Jamaica his family and community were very poor. They would often have to walk very far with pails in hand to gather water for their homes, as there was no running water. When playing cricket – a favorite game of Bolt’s – he would use part of a banana tree and an orange to mimic the bat and ball.

Luckily for Bolt, while he was a teenager he met another local, Pablo McNeil, who just so happened to be a former Olympic sprinting athlete. He and another coach encouraged Bolt to train in track and field at the age of 16 and, as most would say, the rest is history.

This inspiring story speaks to children with a passion for sports, or for just getting outside and playing. In the process of getting outside and staying active, not only are your children living a healthier lifestyle, but they are possibly paving their way as one of the greatest athletes alive!