The official first National Football League game of the season is tomorrow night, September 8th, which means most of us will be on the couch ready to root on our favorite teams every weekend in hopes of that slim opportunity to somehow make the Super Bowl! 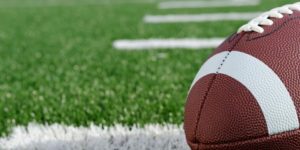 In 2014 alone, 70% of all people with a television tuned into to at least one NFL game which amounted to 205 million people, a staggering number. This is not even considering how many people tuned into to watch college football games which seem to be on every night of the week now. In short, football is watched by an enormous number of people and most of those people are obviously sitting down to watch.

Dr. Patricia and her staff are firm believers that no matter what you have scheduled during a certain day, everyone’s goal should be to reach at least 60 minutes of some type of physical activity. It does not have to be all at once and can even be broken up into 6 different activities for 10 minutes throughout the day.

If screen time starts to become an issue and that time far exceeds your physical activity, get up and take a break from that screen! If inspired by football get outside and throw one, start a friendly game up with your family and friends of two hand touch, play some Three Flags Up, practice some exercises likes pushups, squats, burpees, sit ups and planks on commercial breaks. Other fall activities could include but are not limited to bike riding, basketball, soccer, swimming, dancing, hiking, baseball/softball and whatever else will get you moving!

Activity and exercise is crucial for a person’s overall health, not only for physical reasons but for mental health as well. So make sure to continue to support your favorite team, but also remember to support the most important person – you!